It’s been a while, so I’m going to spoil you with a three post wammy!  I competed at the GTI English Open championships the Sunday before last where I lost second round in points sparring and narrowly won the continuous sparring category.  This (and the upcoming comps) has motivated to get my ass back to training. 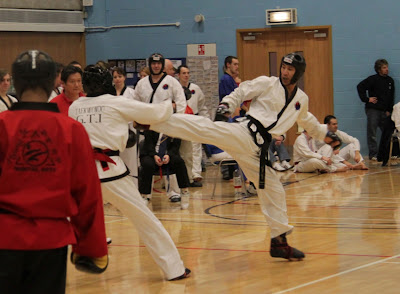 Before this surge in training I was hitting the gym, mixing it up with some isometric training; static resistance training.  For example one of the most common isomteric exercises is the plank.

I used the same isometric principles during my weight sessions e.g. dumbbell chest press, pausing for the count of 20 at the bottom of the exercise and at the top.  Likewise for bicep curls, shoulder press, lateral raises and tricep kickbacks etc.

From this experience I found it somewhat frustrating, as you don’t work up a sweat and it’s a different kind of burn, which meant that I felt like I was barely working.  I used to think, if I’m not sweating and if it doesn’t hurt then I’m not working hard enough – with isometric training this is definitely not the case.

I have a punch bag and would like some new training routines/workouts for it.

If you have any suggestions please let me know!

Another exercise for you, which is a lot shorter but more intense.  This should take between 2 – 5 minutes and works on a fairly new training principal I’ve been reading about called the “after burn effect”.


Important: there is no resting until you complete all ten sets!


Basically repeating three exercises for three sets and finishing on one final set of burpies!

I spent a year working in Taunton, Somerset, where there’s a Royal Marines base.  I trained there a few times and picked up an exercise routine called the Dirty Dozen!


It consists of 12 reps of each exercise. Each Round is cumulative (must include the previous set of rounds):


I tried this out on my University Kickboxing club, who took ~40minutes to complete.  I showed people it when I was working in an American summer camp and I started a little competition to see which pair could get the fastest time.  From what I remember ~24minutes was the best.


I suggest people give it a go, record your time and try and beat it next time.